Blake's, and a day with grownish kids 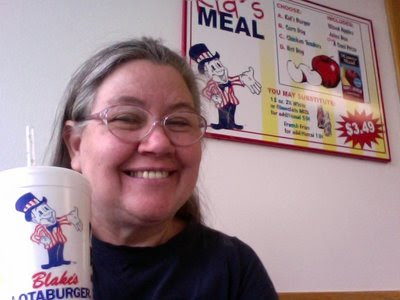 It's been a busy day, with someone determined to show radical unschoolers that we are (in her own words)

Clearly she wasn't over it, because she was posting fast and furiously earlier today. There wasn't time for her to even have opened and tagged the links people were sending.

Because I suggested she should stop writing and be with her children (who are both very young), I thought I should share what I did with my children today.

Kirby, 23: I picked up some of his belongings that had been knocked around by cats we've lately taken in who still aren't happy being here. I found a piece of artwork his cousin, Gina Trujillo, did years ago that he's considering having made into a tattoo. I didn't talk to him; he's at work, in Austin. I talked to Marty about him for a while.

Marty didn't sleep here, but I did some of his laundry last night, and when he came home he helped me with his height and strength to put some plastic netting up in a tree and over the back of the basketball goal for morning glories to climb on. It will be beautiful by August and fantastic in September! We talked about some of his friends, his girlfriend, Holly's plans for the afternoon, and his. Holly's going to Madrid, New Mexico, to a gypsy festival with Ashlee, Marty's girlfriend (also Marty's ex-girlfriend Liz, and another friend of Ashlee's who is performing at the festival). Marty was going to hang around with other friends. He wasn't here long, but most of the time he was here we were together, working and talking.

Holly woke up before I did. We were both up late, talking and doing things together last night, but she was on call to go work at the flower shop on base if the lady there needed to go help her sister have a baby. Apparently the sister didn't go into labor today! I showed Holly some things about doing webpages in straight html, and making her own templates for a website she's making for a gallery. She showed me something on Photoshop I hadn't known. I showed her some html sites and tools, and how to edit blogger pages (also for that gallery job). She said it's quite a bit like MySpace, in which she's fluent. We worked on art and code for a couple of hours together.

She helped me in the yard a bit and then we checked on the cats who are living in the library until such time as they can be introduced to the larger house.

Later I helped her choose clothes to look gypsiesh, and reminded her to take a camera, sunscreen and an umbrella, which she did happily.

Then I worked on my book (I'm more and more excited about it as it's coming together), cleaning the hot tub in stages, and I went to LotaBurger for a while. I took the laptop and worked on rearranging pages in which order to make the book flow more logically.

Even on a "nothing" day, we had learning and love.

Keith's off camping near Silver City (an SCA event at City of the Rocks). He'll be home tomorrow, and then on Monday Holly drives to Silver City to stay five nights to work with/on/around the gallery. One of those days will be shopping in Palomas, Mexico. I created an international travel permission letter Friday and we had it notarized, as she's not yet 18.
Posted by Sandra Dodd at 6/06/2009

Sounds like a lovely day. Good for you and yours!

BTW, I just posted to familyrun.ning. It's about you.

And now I'm going to hang out with my family. Probably play some music since I have a new guitar!

And thanks to Ronnie, too, for defending me in the ancient days when Job was fresh in more people's memories. :-)

I found myself just fixated on the Blakes Lotaburger cup! :-) Less than 2 weeks till I can eat a green chili hamburger there!

Lotaburger! I haven't had one of those in over 20 years. :) The last time I was in Santa Fe visiting family in 1987. We don't have them here in Michigan.

My mom left out the part between Marty leaving and gypsy-prep... I crimped her long, beautiful hair to look like Rayanne Graff (My So-Called Life) with my '90s-tastic crimping iron. <3

I don't think she liked it very much; my mom sticks with her hippie ways and goes for the natural look. SOMEtimes, though, she will let me mess with her style for my own fun and entertainment. (Just on the "nothing days" I guess)

I feel bad now, because the photo didn't show the crimped and clipped up side of my hair. It was art. I forgot to photograph it. Sorry, Holly. I was thinking about getting that Blake's cup in the picture.

Thank you for sharing your story...it is always inspiring to read how others spend their days living & learning together ;)