This worked from Bruno's phone. I'll ask him if he saved it, for those who don't have a phone that wil read it, and in case it doesn't work from a photo on a blog. 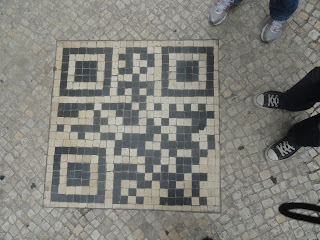 It was near where these guys were playing, which was near a church we had just toured, which had a shrine to Santo Expedito. Cult of Santo Expedito. People who had benefited from his help brought little brass plaques and they were fastned to the collection box and up behind him. Photography wasn't allowed, but I bought a medal and a magnet. "Expedito." He *might* not really have existed. It was noted that it was a cult. I don't think he's fully church approved. 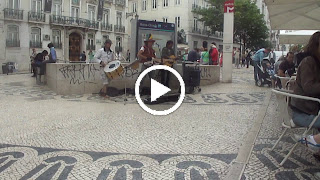 I can't find an image of that little (very little) shrine, right outside the gift shop. I wish I could.
It was in the Basílica dos Mártires. Later we went to a bigger, much glitzier church called Igreja de São Roque, which was once a Jesuit church but was taken away from them (I don't understand all of the story but I bet it's a good, deep one). That church had reliquaries. That church had more reliquaries with viewing windows and bones and pieces of cloth and unrecognizable bits than I thought existed in the whole world. Photos later, maybe.

Perhaps there could be a phone-readable symbol for more info on Saint Expedito. Maybe the prayers could be texted in. That would REALLY be expeditious.

Oh! I found a virtual altar: ALTAR DE SANTO EXPEDITO, so it's nearly possible.
Posted by Sandra Dodd at 4:41 AM

Here´s the link for the cobblestone QR Code that we´ve seen http://qrcalcadaportuguesa.com/chiado/home_uk.html
there's a movie at the end