July is a good month for me, because it contains my birthday, Keith's birthday, by dad's birthday, and Kirby's. Today's the last day of July.

Because I put a post on About Unschooling the site, I looked at the site stats, so I can see if there's a bump. It's not important, but what I found was this: 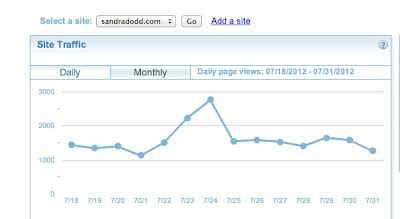 I told Holly a lot of people came to the site on Learn Nothing Day. She said, "Nearly three thousand? That sounds like three thousand people who didn't even try to learn nothing."
☺ So it goes. ☺

July was a good month. Today, Holly and I visited with my cousin, Nada. Last night we played games here, first with Keith, Marty, Will and Holly. Then Holly's friend Peter came. Later Steven, Yarrow, Austin, Lydia and Melody showed up. Keith and Marty went to bed, and the rest of us played Writey-Drawey.

Friday, Keith and I got to spend many hours in a car with Holly hearing tales of her trip up to Yellowstone. Learn Nothing Day was pretty good this year (my birthday was quiet). Earlier in the month I was in The Netherlands, and England, and those were both great experiences I intend to repeat next summer, with Joyce.

August starts tomorrow! Holly is sitting next to me singing and playing a video game. Keith is going tomorrow to visit his dad in Alamogordo. Marty will take me to the airport early Thursday morning so I can go to the HSC conference in Sacramento. Holly is going to Denver for a little concert, with some of the people who were here playing games. They're taking our van, and camping (current plan is, anyway). Marty will have a quiet house.

The rest of August is unscheduled, for me, and that feels wonderful. I'm going to work on my website. Marta Borges Pires is helping me with the site and the chats, by reminding me and check listing me. Marta is also the organizer of next year's Simpósio "Sandra Dodd e amigos em Lisboa" (Sandra Dodd and friends in Lisbon" Symposium)

Here are Holly and Will the morning after she got home. She and I didn't see each other (except through Skype) for nearly two months. 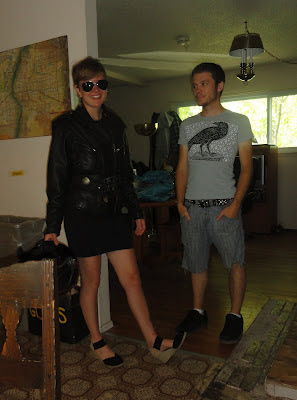