I had two kinds of stamppot, made by Graham Dusseldorp, the dad of my host family. He said it's more a winter dish, and the green one (with kale) is the more regular kind his mom makes. The purple one had red cabbage and apples. Both were good but I liked the purple one better. There were two kinds of sausage—one for each—but the gravy was the same for both, and was what the cooked sausages had been in.

Rippy and I had been in Amsterdam all day where we went to canal tour boats and climbed up the bell tower at the Westerkerk. There will be photos.

But back to that dinner thing: 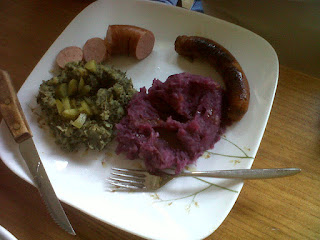 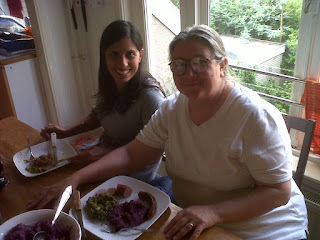 So I had two dinners. A Stamppot Sampler! :-)