Yeah, you heard me.

Gradually I'm learning about English construction. Two years ago I talked to some chimney repairmen in the Yarrow Valley who talked to me about the surface of the manse and the church, and described "roughcast," historically and more modern. First the wall is plastered, and then gravel was flung at the wet plaster (historically), but the modern method was to spray it on. I came back to Julie's and noticed her house was that way, but here they call it "pebbledash."

Today we passed by a house where men were scraping wavy designs over plaster. I wondered if it was in preparation for pebbledash, which I would like to see, but Julie hadn't seen it, and offered to drive back around the block. We stopped and asked, and one of the guys described what they were doing. It was a preliminary coat OVER something like pebbledash (some sort of texture) AND over the bricks. The younger man working on the corner was covering up corner brickwork, and the older man said they were even covering over arches and all. The neighboring house had them covered already.

He said the bricks on the corner were called "the coin."

SO... they weren't doing pebbledash. He said it was going to be a smooth render.

A month ago, I wouldn't have known what that meant, but in Bristol, Alison was talking about the remodeling of their house, and used the word "render." It means what we call "plaster." So they were going to mix sand (which was a pretty reddish brown) and cement, and put that on smooth. Even over the bricks.

Was the sand chosen for the color? That would be the color?

No, he said, the color would be added later. Painted on by someone else (I think he meant), later.

He said if we come back in a few days we can see his part finished. I hope we remember to do that.

Julie said "coin" is from the French word for it. So I'm home and looking that up.
Quoin. Corner Stones, and here are some molded, fake ones: Quoins (for mobile homes) 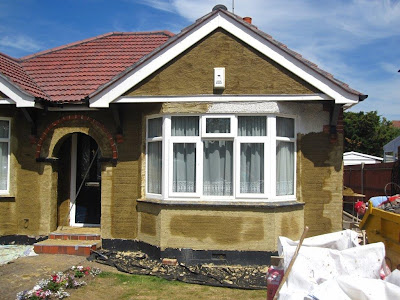 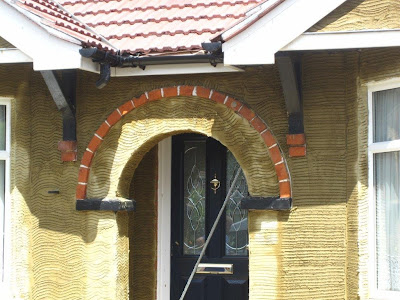 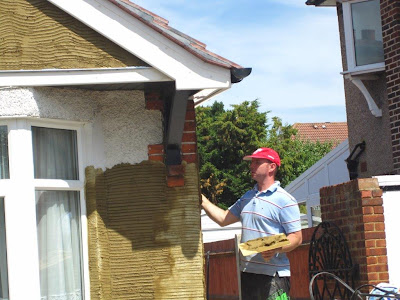