Oh! My computer was fixed on Tuesday for less than $100. Woohooo! And I looked at all the iPhones and their myriad potential docking ports, and the macbooks and the ipods that seem to do everything an iPhone does except that one thing... telephone calls.

I was at the Apple store in the new Uptown mall in Albuquerque, which is between Winrock (a dying mall from the early 1960's) and Coronado (a thriving mall from the late 1970's). But THIS mall is cool. It's like a little town with six blocks of new buildings. You can park right in front of the stores. The intersections are roundabouts, and pedestrians have the right of way more places than not. There's underground parking and a parking lot for people who want to hike. There's a spa with a pool. There are very expensive restaurants. There's a ground fountain. There's a store called Anthropology (-ie) I'd never heard of and the display art was really interesting. They have an artist who does... art! So the building is set up kind of like a dozen little boutiques, by theme and mood. I didn't have a camera with me. The window art was made of books. I should go back with a camera. 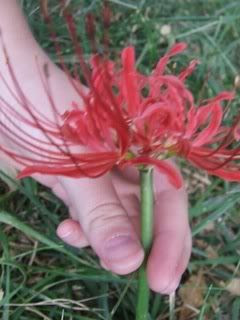 Last night Holly and I went on very short notice to see the filmed final Broadway presentation of Rent. $20 apiece, and I'm thrilled that we saw it. It's showing at 11:30 a.m. Saturday and Sunday, and that's it. It's at Rio 24 (for those in range) but it's showing in lots of towns, but only four times in each. So after Sunday, I guess we'll all just have to wait for the DVD. (They wouldn't cruelly decline to put it on DVD, would they?)

I've been low-level sick for a month. Marty walked to the store with me yesterday and reviewing the week, we discovered we both have the same symptoms. It's like a head cold without fever or being really sick. So maybe we have an allergy we didn't have or didn't notice before. It's making us forgetful.

It's nearly October, and I love October. I like the days being surprisingly cold, and hot, and mixed. I like the plants going to seed and the visitor-birds coming through on their way south. We would see more if we were closer to the river. When I was a kid we were just a thousand feet or so from the Rio Grande, and now we're maybe eight miles, and for birds, that's a big difference. They're going to follow the river, not cross mountains.

Kirby was talking about a visit home, but his seasons revolve around game releases and overtime opportunities, so I think he'll wait until right after New Year's. Keith's life revolves around government contracts, and presidential elections have a big effect on such things, so the engineers are restless. He's worked at Honeywell for over 20 years, so he's built up a lot of time off, and that's a wonderful thing. Kirby's in paid-vacation land now too.

I'm moving from one little project to another and cooking a lot this week, and sleeping a lot. It's a still place before the next adventure.
Posted by Sandra Dodd at 9:43 AM

There are so many similiarities in this post and my own days. We were in both an Apple store and Anthropoligie yesterday marveling over the same things. I loved the window display of books and wished I had my camera. This was in a newer shopping plaza that I call The Land of Milk and Honey because it feels so rich. I love October for the weather change that I remember from my time growing up with such weather changes. It's also Camille's birthday and I always remember how the leaves were changing when she was born. My husband is a engineer working for a gov't contractor and is feeling very restless, too. And unfortunately, I'm feeling a big head-coldy. Hopefully we'll all feel better soon! Enjoy your autumn day.

I love the little flower, it looks like one I saw growing all by itself outside Madeline's window.

Do you know what it is? It looks so tropical to me.

Flo, cheers. I'll drink some Nyquill in your honor tonight. I really need some blackout sleep. (No apologies to my hippie readership: back off now. I have few vices but drugging myself to sleep when I'm sick is one of my favorites.)

Well hello and thanks for that word for Karl.. gatito. He loved it and just as you thought, he giggled when I said it. English is so Germanic with the k's.. kitten and cat.

If you do go back to that Anthropology place and get photos I'd love to see how the artist is working. When I went to Miami there was a fantastic place, a whole building of Latino artists where some of the artists for a traveling show a friend was curating were working. Each studio had a huge window (double human height) with a regular door to the side. It was an amazing place with artists who were producing some really great stuff. Wish I had a scanner that worked. I have that show's catalog.