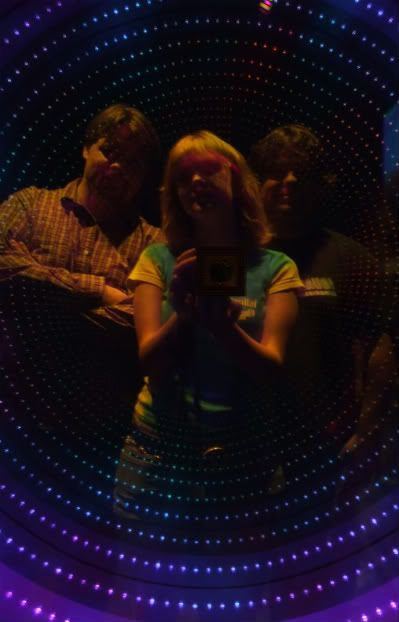 Yesterday we spent a long time in the museum, but not long enough. They closed before we had had enough fun.

We went intending to see the DynaTheater shows, and saw two ("The Alps" and "Dinosaurs Alive"), and then went to the Start-Up exhibit, on the history of personal computers as seen from Albuquerque (sort of). It was BIG and wonderful, and I didn't get to see half of it, because the parts I did see drew me in and kept me occupied.

The small photos can be clicked for details, but it was very difficult to take photos there because things were lit up from inside, and there were bright lights shining from odd angles, but you'll get the idea.

The "Rise Against the Machines" room was set up as a movie theater, but not. The show is short and funny and quite multi-media, with things lighting up hither and yon and patterns washing around the room, and computers appearing behind the screen while the movie is playing. Between showings, the screen is the monitor for a game of Pong.

That's Brett on the left, and Marty and Bo on the right, at the game controls.
Here's the first laptop:

There was a game in another room that involved plotting routes for pizza delivery on a vaguely Albuquerqeuesque map. There were four control points, so it was perfect for Holly, Marty, Brett and Bo to play while I read more and more displays (but not enough). 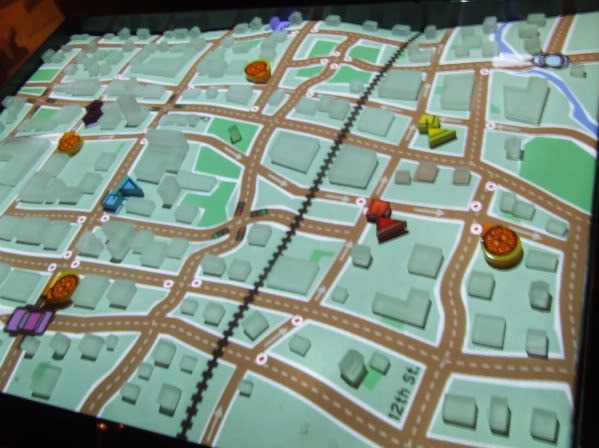 Holly took the two photos in the lit-up infinity mirror. I don't know, honestly, what it was supposed to be, because they were trying to get us to leave, and I was playing with a hand-cranked generator that lit up a Light Brite and some other things, but that's me in the red, in the first photo. The other is Bo, Holly and Brett.

I very much liked the fact that they credited an artist. Susan Kare was pictured lounging at her desk happily, and icons she designed were on display there, along with a create-your-own-icon toy we didn't have time to play with much, but I hope to go back and take Keith! I'd be interested in a display someday (or webpages, if anyone knows of some) talking about the artistic design of the computer cases themselves. I've had a couple of beautiful Macs, and it seems fan mail is in order sometimes. But Susan Kare was the artist spotlighted in this display, and I'm glad she was included.

Oh man, I would love to go see that. Is that an ongoing museum? Sometimes the museums around here have exhibits for a limited time. I love computers. That is one of my hobbys.

It's in a corner where they've had travelling exhibits before, but if you click the card/intro/brochure-thing above, you'll go to their site which is pretty cool. I learned there that the display been open for two years already, so maybe it's "permanent" (which museums never much are anymore, but longterm, anyway; stationary.

Two years ago is about when we bought a binocular microscope, which meant we didn't have to keep our museum membership up just to go and use the microscopes. With our children all adults now (as to ticket prices), the family membership doesn't do any good, so we hadn't been there for a while. But I'm going back soon!

Thanks for the photo of the Albuquerque signs (Frontier, Hiland, etc.)! Made me feel right at home ... at least the way home used to look, as I remember it.

Holly's picture in the lit up mirror are so cool. I love the big one.

David was a consultant to that exhibit! I got to see it a couple of years ago when I was in ABQ, and loved it, too!

I meant to add my name to that last comment--sorry!

Oh my gosh what a cool exhibit!