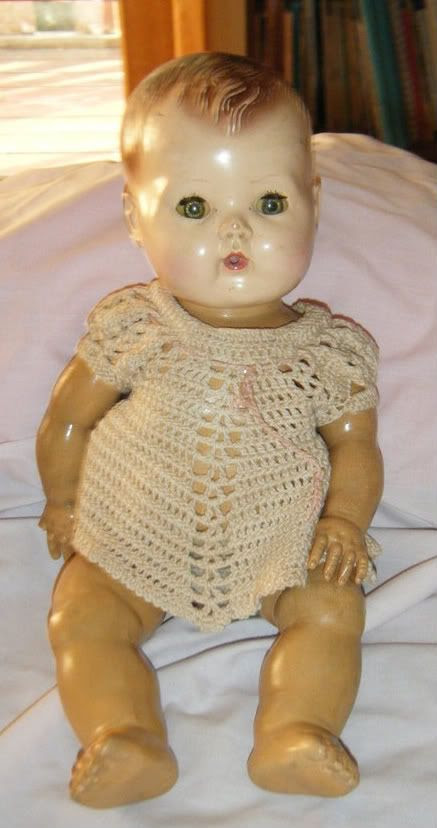 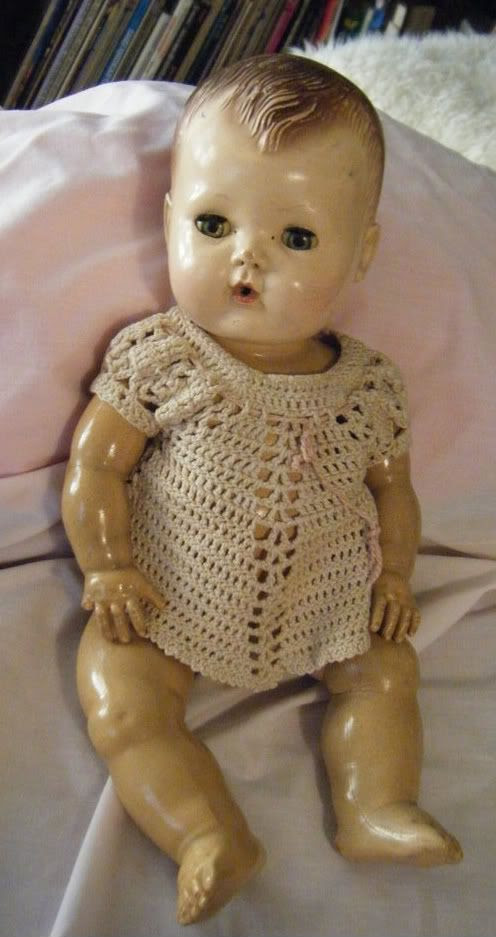 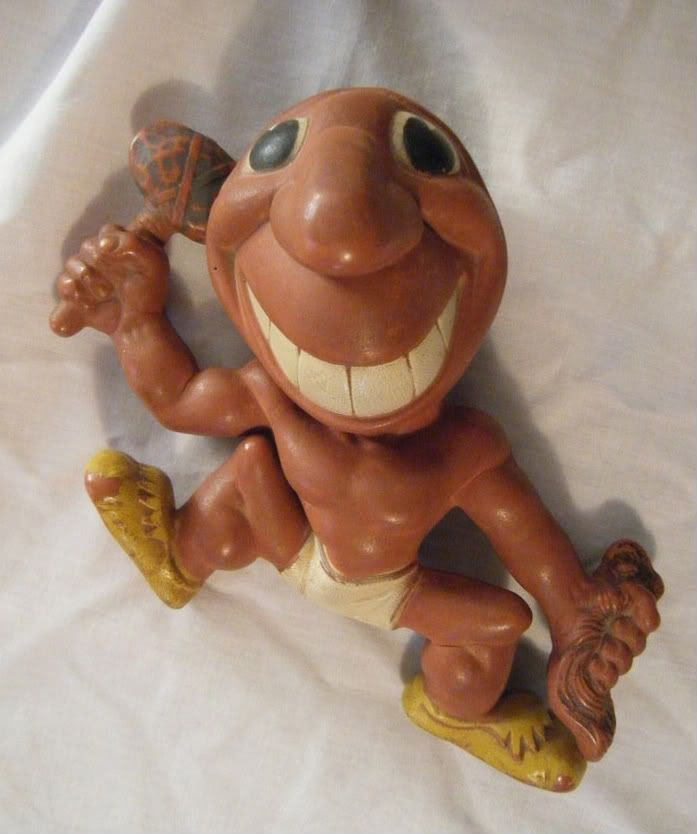 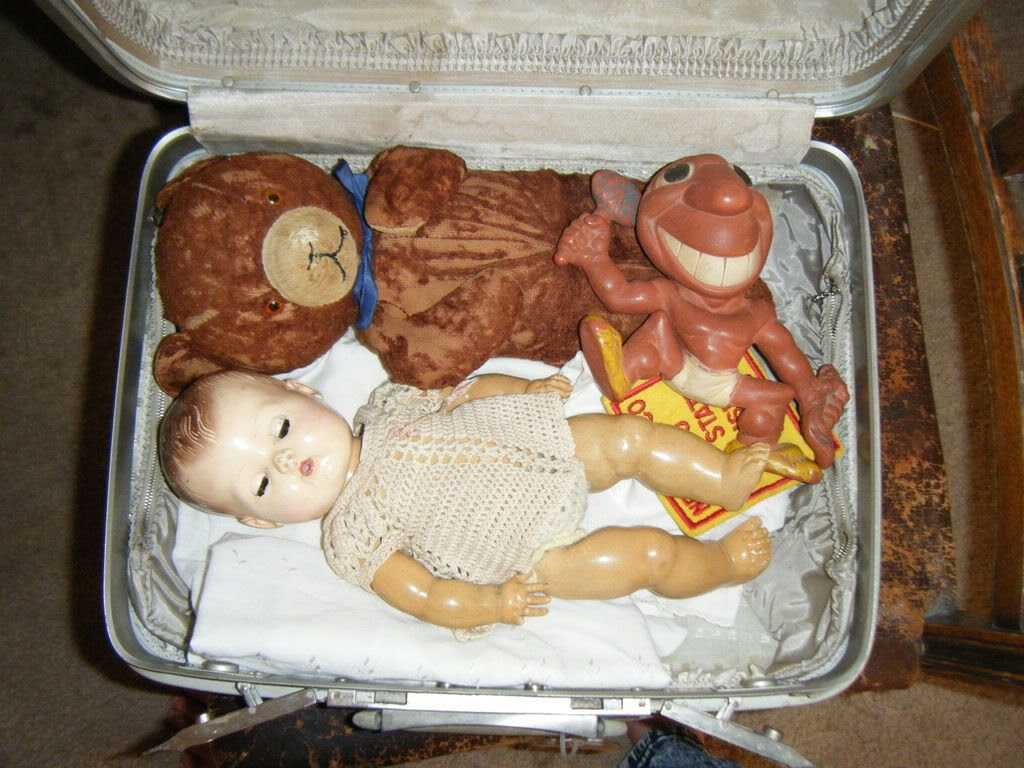 I don't mind being spiritually unready to detach myself from object permanence. Maybe next lifetime. Maybe never. Don't they have monks and nuns for that? I'm a hoarder and an archivist and I love my little souvenir things.

So I have my teddy bear (Teddy) and my rubber Indian (Kawliga, named by my mother before I could speak, but chosen by me over any other toy in the store, even though my mom said she was carrying six-month-old-me all around and trying to persuade me to get a little stuffed lamb), and my Tiny Tears doll. They live in this Samsonite overnight case from ancient days.

I knew several years ago that Tiny Tears had lost a pinky finger. Rubber is that way. She has a papier mache head or some such, and rubber everything else.

I knew a year or two ago that my Indian had lost his squeak. He squeaked for over 45 years, which is more than can be said for most squeaking-things.

Today, Holly wanted to show Brett my doll. Impermanence was doing its dirty work, and her leg had separated from the part that held it inside. And the Indian not only didn't squeak, he had petrified in an awkward position. Okay, so he's always been in an uncomfortable looking and politically incorrect dancing squat, but he was a guy who could dance and squeak, but he is, I know for sure, at least 55 years old. And he's kinda stiff. And one leg is up too high, and his tomahawk is kinda touching the back of his head.

So I asked Holly if she would pose them and photograph them, where I couldn't see, because it's a little bit distressing for me. That Indian and that teddy bear got me through countless dark and scary nights when I was a kid forced to be in my own bed two or four rooms away from my parents. Teddy got me through some bad times in college, and I slept with him a time or three when I left my first husband. But Teddy's fine. It was the nose of Kawliga that I used to suck when I was a toddler and not allowed to have a bottle or a pacifier. I had my Kawliga. I'm over it now. Nearly.

So, breathing through the angst of the loss of functionality of two out of three of my baby companions, Holly came back with the bad news that the camera was broken. 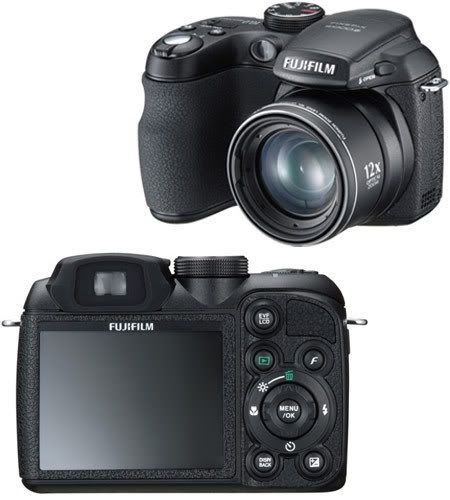 So Holly and I trekked out on errands, one of which was to take this camera to the dealer from which it came... when? Over two years ago. It cost $250 plus a memory card, I think. Its problem was "focus error." "Take it to the Fuji dealer," the book said.

So... —the post office first. Mailed some books and a set of thinking sticks.

—Toys R Us for Holly to look at baby dolls (which is what started this entire Permanence-Failure-Cascade in the first place, her talking about getting another baby doll). They hire 16 years old and they need to hire for Christmas. Good information.

—Anthropologie, so I could show Holly the lamp I liked and get her to sneak photos (with her phone) of some of the shop art, but some of the window book display had been taken down; bummer. I wanted a scarf and she talked me out of it. They're hiring, but they only hire 18 and up.

—Coronado mall to the camera shop. The camera shop is gone. Called Brett to ask him to look up a Fujifilm repair shop. There is one, and we could see it from there, across the street.

—Camera repair shop is like a museum of discarded impermanence. Non-working cameras in the hundreds, in glass cases. It's fixin' to make me sick. Focus error is one thing she can't fix there; it would have to go to Fuji; it would cost $150.

—Called Kirby to see what kind of camera he owns, because Holly liked it. A Kodak something. I wrote the full name down on the bottom of the kleenex box in the car. He said he doesn't love it entirely.

—Holly's too thirsty to think; we buy water. I'm hungry; we spend too much time trying to get three chicken strips from KFC, and a small root beer. Long fiasco, involving the drive-through, both of us going in and waiting, Holly going back in... But at the drive-through, I call Lori to see what her camera is. I know she loved hers. I'm dialing her number when the KFC guy says they don't have sweet and sour, but do I want blah blah or blah, and I say "Honey mustard," to Lori, in Tucson. She likes me anyway. She has a Nikon something (also written on the kleenex box).

—Holly needs a small fancy purse for a homecoming dance she's attending Saturday. Went to Savers; found one. Angsty me, asking Holly where she would go to buy electronics, and she said she never buys electronics. Oh yeah. I do.

—Went to Target, to look, because it's on the way home and if they have one we're done. We look at everything and there among all the silver and black cameras is a green one. And it's a Fujifilm finepix. It's nothing like our old one, except it takes the same memory card and has the same menus and icons. That's an advantage. And it's on sale for $150, the cost of repairing the old one. I call Kirby again because Holly isn't sure the one we see there was the same as Kirby's. I'm not loving the day, but I do love Holly.

We got the green Fujifilm camera and I've spent the past three hours figuring out what it can do. Everything, and some more that the old one couldn't. It's not as easy to hold, and things that were physically set on the old one (at least by the user) are through a menu on this one, but the names of modes are familiar and this one has larger prompts and options, big enough to read, and clearly in English. The old one was physically easy, but visually cryptic.

I love Holly and she loves photography, and I'm becoming very digital-camera-dependent my own blog-loving self, so I wasn't willing to stretch and burp and think about it.

One really good thing: The old camera was too big for her to have taken to the homecoming dance. Now, with this one, it will fit in the fancy little purse she just bought for $1.99 and we didn't think about it until we were nearly home.

The photos up top were taken by Holly with the new camera. Thank you, Holly.

To any of you reading who are not at all attached to favorite shoes, or photos, or books, or games, or guitars, I salute you. I am in awe of people who can really rise above the love of an old van or a certain pair of scissors. I feel like a baby, and the fact that my dolly's leg is off doesn't help.

Keith is healthy, I've spoken with Kirby three times today, Marty is getting better, Holly and I had a really nice afternoon despite the glitches. I shouldn't be sad about some molded rubber and a camera nobody expected to last more than a few years anyway.
Posted by Sandra Dodd at 8:56 PM

So good to read your posts and all is well there! Enjoy the new camera. I'm going to lay down to sleep with my human baby (well not baby anymore).

I didn't see last night's post until just now, but WHAT a day that started from "post office and unscheduled" and became adventurous and long and tiring. I'm glad we went to the post office first.

I understand these attachments. I have them too. After living in my grandmother's house (among all the things she was attached to) for 5 years as an adult, I went through a phase of releasing myself from some of my own treasures. I'm over it now... mostly. But I continue to mourn some of the items I discarded during that time.

I'm like you, a hoarder, a packrat. It annoys my husband, so the best I do is to try to at least organize what I have...it's an ongoing process. But, I love my old teddies (a panda my aunt gave me as a baby), my Barbie paper dolls, my doll collections. I love the excitement the kids get out of seeing them. Well worth keeping in my opinion.
My Sony camera broke about a year ago (it was my backup camera after getting my Nikon D80-which I love) and they wanted $300 to fix! I don't think I paid that much for it, so I left it at the camera shop, one of those you see lying in your camera shop. Such a disgrace that it cost more to fix than the camera's worth.....

I'm totally the exact opposite. I love to throw things. My husband is like you. He is the single most sentimental being on earth. (in my eyes anyway) I think I'll be nicer to him about it. Thanks. ;-)

I wish my mom saved some little things like that from my childhood. She is a thrower. Ruthless.

I have a general tendency to get rid of things but I do have my old teddy in a hard suitcase in my basement. It looks exactly like your Sanda except WAY more beat up. The fur is pretty much rubbed off, both ears are missing and the limbs probably would have fallen off but my mom had a suit made for him when I was in high school. I love that damn bear!

Kelly, if you want to send a photo of your bear, I'll put that and a photo of mine on a webpage together. I have a drawing I made of my bear when I was little, too. I'll add that.

Anyone else want to send portraits of your childhood cuddlies for a collection? My mailing address is on my main webpage sandradodd.com

I wish I had a photo of me with that bear when he was newer (and I was newer), but I don't think there is one.

My two kids who were both forced out my bed earlier than they would have chosen (for reasons of new babies and my aching back) are the only ones who've developed an attachment to fuzzy inanimate objects. The other two, having gotten their nighttime fill of me, are lovey-free. Hm.

I like the prettiness of the green camera. But I agree with you, the tiny cameras are not easy to hold. My finepix (which I love otherwise) is tiny too and I'm always fumbling with it and accidentally hitting wrong buttons. Thanks for the suggestion to store photos online -- even though we have an external hard drive, I still stress about losing everything in the event of a fire or robbery.

Life was simpler when portraits were on heavy paper and it only took one box or album to store all the photos of a family. I like digital cameras and the ability to share, though.

In 2020 with people staying home, there have been a couple of online projects for people to share a video from their window, and I heard animals, and birds, traffic, people's voices, a dog barking, from far-off other exotic places. I saw photos from windows all over the world. I like that, even if it's fleeting.