Fast away the old year passes

"Deck the Halls" is used as a Christmas song, but it's as much a New Year's song. Since before anyone can remember, there's been something about babies around the time we now celebrate as Christmas and New Year's. There is birth and rebirth, and another rebirth every year. So there's Jesus and then there's this baby 2009. Neither will be a baby again. Deborah Cunefare sent me something very interesting, which included the two illustrations at the right, and some others. (Click those to see.) Thanks, Deb! There's another baby to come, in February. He's not usually so young, and he's more dangerous, though I note 1918 has a sword, over there. 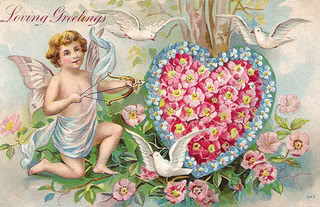 From there on, not counting some baby chicks and ducks (made of marshmallow, pretty much) about the time of the crocus and daffodil, the year gets older and older, so rejoice in the baby stages. Babies grow up faster and faster.

By the time it's 2009 at my house, New Year's day will be half over in India, and mostly over in New Zealand, so my baby new year is one of the youngest of all! Have a great day and month and year, all o'ya'll. Thanks for visiting my blog. P.S. I'm back. I forgot to mention that Holly has named her laughing, peeing doll "Dezmond" (from an Irish boys' names site, because he came from Ireland), and his laugh reminded us of this video, which can be the soundtrack of a Happy Baby New Year!
Posted by Sandra Dodd at 7:45 PM