Look at my hair!

Alex Candelaria took this photo of me at the picnic following the Life is Good conference at which I spoke in May 2012. Getting that date in here for future-looking-back purposes.

My hair looks really grey! In a good way. :-)
That's me in the middle in a brown hoodie looking at my camera. 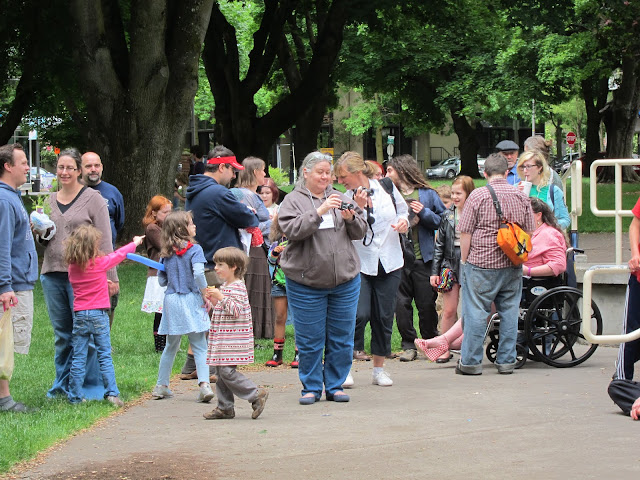 The week before that photo, we were playing the sorting game, in Massachusetts at the ALL-in-May Symposium.  Same game we played in Albuquerque in December, which I had made up so that name-impaired people (such as myself) could still participate successfully in a mixer/intro game.  I was asked what it's called.  I think.... "the sorting game."

Anyway, we were sorted into two groups by a couple of young girls, and we were to figure out what their sort criteria had been.  Someone said "light hair and dark hair!"  But I said, "No, I have dark hair."

Then it turned out that it WAS hair color, and I had been sorted into the light hair group.  Huh!   Really, it's about time.  My 59th birthday is this summer.  I've been wishing since my 20's that my hair would start to go grey.  My dad's started turning when he was in his 20's and I always thought that would be fun, and salt-and-pepper braids, buns and hair-twists were beautiful, all stripey.  Would be beautiful on a young woman.

Well if that's one of my big disappointments in life, not going grey sooner, I've had a pretty cushy life.
Posted by Sandra Dodd at 1:06 AM

And it looks good on you!
My hair has finally made that transition to dark hair with some grey to grey hair with some dark. And I am loving it.
Enjoy the rest of the trip!
Mary