Schuyler's house from a short distance

The wind was blowing hard. I was out near a wheatfield behind the house, with Linnaea. I was just saying her house was on the edge of a wheatfield and everything was green or something...

Maybe turn the sound down or off, because of the wind noise.

I'll add some more photos of the yard and parts of Schuyler's birthday celebration.

We went to the church to see what time the services are. This is a shot from inside the entry, where the notices were. They had a request not to close the gate to that little area because there's a bird nesting in the rafters there. 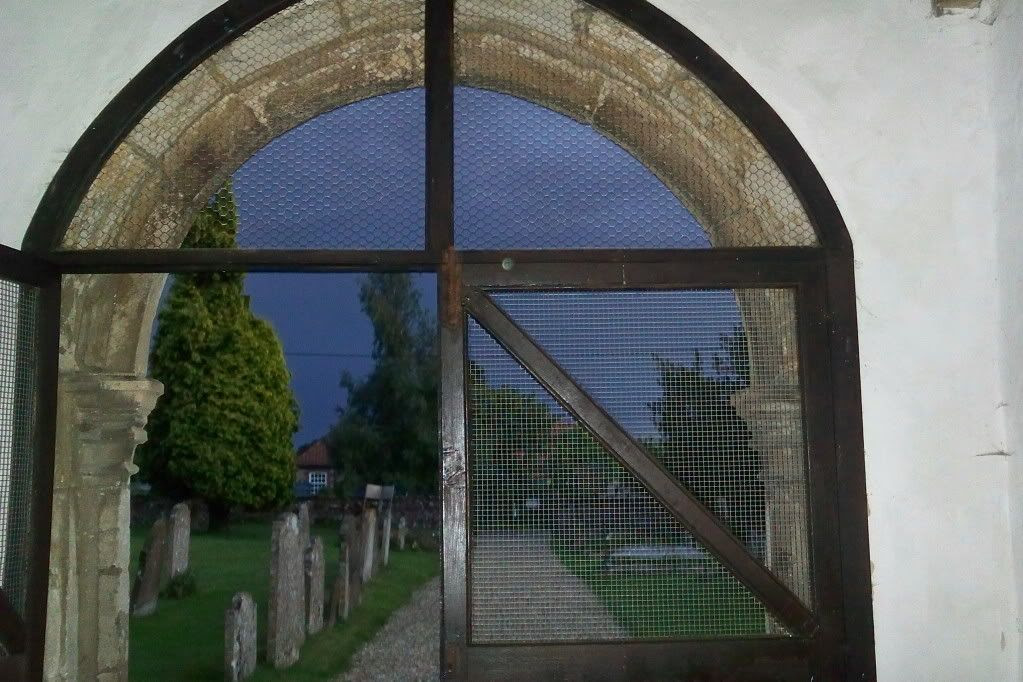 These are just various pictures of the yard (garden) and of Linnea who was giving me a tour, and of a couple of their five BIG cats, and some of the birthday food and David (left at the table, and holding the hedgehog) guests and autos, and nothing's really important but it's all cool, especially the little hedgehog who was rescued hungry and weak, but is better and will be released in a week or less. (Check out his eye!) One of those photos is of a tunnel through the hedge to the field behind. I could get almost all the way through, but would've had to crawl the last bit and it was muddy. For cats and kids, though, it's perfectly passable. And the upper window facing to the right in the photo (west) is the room I'm in. The photos aren't great; sorry. They're memory joggers for me. I missed getting Schuyler. It was a very fun day, great food, nice people.

That fifth photo that doesn't look like much is a puddle, a little pool of water on the roots of a tree, with clover around it. But it's less than a cup of water and seems kinda permanent. :-) That much water wouldn't last half an hour in Albuquerque, but there it just sits.

The church is this: All Saints in Carleton Rode. The entryway was interesting, but I couldn't get a good photo of it. I'll have to think about these photos-in-tight-places situations. What I saw only kind of shows.

I remember you visiting us and remarking on all the water just lying on top of the ground. It's still here, almost 20 years later :-)

I am full-on fascinated by shallow standing water.

There was a joke on Saturday Night Live about Barbara Walters' most fascinating people--that she was easily fascinated.

I think it's been one of the best parts of my life, that I've been easily fascinated.

I remember your barn, Steve, and the thousands of miniature strawberries (of which we only gathered hundreds) and the ruins of that mill, and the cemetery with the glass covers over photos of the deceased on the French gravestones. And Ruta being the nicest hostess ever.

Such lovely photos :) Thanks for sharing, I love English countryside and the architecture! And oh my gosh, that hedgehog is the cutest, we have a family of them living in the kudzu just outside our neighborhood but we haven't seen the babies, too cute.